Terry Tallen Makes Major Gift to ‘For All: The Indiana University Bicentennial Campaign’ in Support of Indiana Football Complex Renovations

BLOOMINGTON, Indiana – Indiana University Vice President and Director of Intercollegiate Athletics Fred Glass announced today a major gift by IU alumnus and former IU Football captain Terry Tallen to the Indiana University Bicentennial Campaign for Athletics. This $2 million commitment helps provide funding for the renovation of the football team area in Memorial Stadium. In recognition of his gift, the area will be permanently named the Terry Tallen Indiana Football Complex.

“We are tremendously thankful and grateful for the generous gift from Terry Tallen and his family,” Glass said. “The new Terry Tallen Complex will make a huge difference in the lives of both our students and staff on a daily basis. Terry has had an enormous impact on IU Football and IU Athletics for more than 40 years as a player and alumnus, and we are thrilled to have his name permanently associated with IU Athletics and our football program.”

“My time at IU, particularly as a student athlete playing football, truly shaped my life for success, and I’ve dreamed of giving back ever since I first stepped onto this spectacular campus,” said Tallen. “I’m deeply appreciative to be able to make this gift and place my name on this new state-of-art athletic complex. I am motivated to provide this gift to the greatest University in the world with the intention that it will be inspirational and aspirational for our current and future student athletes interested in leadership regardless of sport.”

Terry was recruited to IU by Coach Lee Corso and Assistant Coach Jim Gruden and was deeply inspired by Coach Corso’s leadership, wisdom and enthusiasm. Terry graduated from Stephen T. Badin High School in Hamilton, Ohio.  He was a versatile All State football player and in 1977 was elected co-captain of the Ohio All Star team. Terry was named to the Badin High School’s Athletic Hall of Fame in 2004.

“Terry Tallen was one of the most gifted football players I coached at Indiana University, but he was also a great leader. Terry was a two time captain for us and captain of our 1979 Holiday Bowl Championship team,” remarked Corso.  “Following his graduation from IU, he has been a great leader in the business and real estate world. This gift to Indiana University, one of the largest ever given by a former IU Football player, reinforces Terry’s love and commitment to IU Football. I am so proud of Terry that he is still leading by example for Indiana Football almost 40 years later.”

Terry Tallen graduated from the Indiana University Kelley School of Business in 1982 and while earning his degree was also a three-year IU Football letterman. Terry was elected team co-captain in 1979 and 1980. The 1979 team was nationally ranked and won the Holiday Bowl, IU’s ﬁrst bowl victory. Terry was named the United Press International’s Defensive Player of the Week following Indiana’s Homecoming victory over Wisconsin in 1980.

“We would like to thank Terry for his continued support of our football program,” head football coach Tom Allen said. “He’s been a great asset to us over the years and we appreciate his generosity. The Terry Tallen Complex will have a huge impact on our current students and potential recruits. It’s great to have a guy like Terry on our team.” 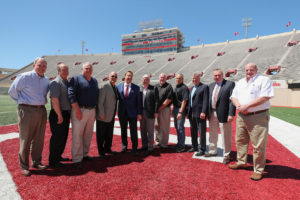 Terry has been a loyal and active Indiana University alumnus including giving his time, talent and treasure back to his alma mater. In recognition of his lifetime commitment, he was awarded Indiana University’s highest honor for past letter winners, the Z.G. Clevenger Award, in 2016. This honor recognizes lifetime involvement and support for a living I-Man. In 2008, Terry established the Terry Tallen Football Leadership Scholarship given each year to a team captain. Terry co-chaired the IU Holiday Bowl scholarship fund in 1999 raising $100,000 for this annual scholarship. Under his leadership and as a component of the funding, every player, trainer, coach and administrator received a Holiday Bowl Championship ring.  Terry is also an advisory board member and frequent guest lecturer at the Kelley School of Business Center for Real Estate Studies and speaks at athletic and leadership related events and charities.

Tallen added, “I am a strong believer that being an Indiana University student athlete is an extraordinary opportunity and privilege and I am a firm believer in paying it forward. While the Terry Tallen Indiana University Football Complex is a significant opportunity to give back to IU, it is also intended to be a driving force to further expand and enhance IU’s reach in the competitive world of college football recruiting and to be a motivating force for all student athletes to achieve and to pay it forward to our future generations. I am deeply grateful for my teammates, coaches, administrators and fellow students and for the outstanding education that I received at IU.”

In 2001 Terry founded Tallen Capital Partners, LLC, and remains the company’s Chairman and CEO.  Tallen Capital Partners, LLC is a privately held,  vertically integrated retail and mixed-use real estate investment and development organization with offices in San Diego and San Francisco. Prior to founding Tallen Capital Partners and becoming an entrepreneur, Terry enjoyed a corporate career as a senior executive with some of our country’s largest public as well as private companies, including the Pepsi Cola Company, Coldwell Banker Commercial, Burnham Pacific Properties, and Watt Commercial Properties. He is considered one of the leading shopping center investors and developers in the Western US.

“I am deeply honored to be involved with the new facility and do this on behalf of our teammates, coaches, faculty and my family,” Tallen said.  “Our IU football family is a large and close-knit group and we are all truly blessed to have shared the IU experience together. Through collegiate athletics, a dedicated passion and an IU education, anything is possible.”

Tallen’s commitment serves as a leadership gift for a fundraising effort to support the football renovations at Memorial Stadium.

“We hope Terry’s gift will inspire other former IU Football alumni to step up and support these efforts. This is the largest gift ever provided to IU by a former football player,” remarked Mark Deal, I-Association President and Assistant Athletic Director for Alumni Relations.

This gift counts toward the $3 billion campaign, For All: The Indiana University Bicentennial Campaign.

For All: The Indiana University Bicentennial Campaign is taking place on all IU-administered campuses including IU Bloomington, IUPUI, IU East, IU Kokomo, IU Northwest, IU South Bend and IU Southeast. The campaign will conclude in June 2020 to coincide with IU’s bicentennial year celebration. To learn more about the campaign, its impact and how to participate, visit forall.iu.edu.