Tallen’s Gift Should Be Telling in its Effect 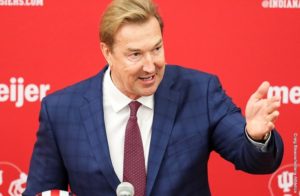 BLOOMINGTON, Ind. – It was hardly the first time Terry Tallen went the extra mile for the glory of old IU.

Tallen’s $2 million gift to finance further renovations at Indiana’s Memorial Stadium – over 25,000 square feet of new cutting-edge facilities underneath the west stands set for completion by the 2019 season – was formally announced Friday.

But the guy has always shown willingness to go beyond the call of duty.

Tallen was a co-captain of the 1979 Indiana Holiday Bowl team that posted the program’s first-ever bowl win. But he played in that game under circumstances that would have kept most mere mortals sidelined.

He dislocated his right elbow in the Old Oaken Bucket game against Purdue that concluded regular season play Nov. 17. But Tallen was back on the field Dec. 21 in San Diego against No. 9-ranked Brigham Young.

“We found a way to allow me to play by putting my arm in a kind of steel cast that was covered by rubber,” Tallen recalled Friday. “It must have weighed 50 pounds. I could barely lift my arm.

“But it passed all the NCAA and Big Ten rules, so I could play in the game. My arm was bent … it was a bit of a club … so it was great for pass rushing, right?”

It wasn’t so good for blocking kicks, however. So when BYU was setting up for a potential game-winning field goal in the final seconds, IU coach Lee Corso took starting middle guard Tallen out.

So Tallen was standing next to Corso when the field goal attempt failed, and again when Corso and the Hoosiers accepted the Holiday Bowl trophy.

And several of Tallen’s teammates were present Friday to see Tallen hand the Hoosiers something else of real value.

And it should dazzle during recruiting, the lifeblood of any program.

“The impact of this facility is going to be huge for our program,” current IU coach Tom Allen said at Friday’s ceremony in football’s Team Room at the North End Zone Complex. “I can’t say ‘thank you’ enough for the investment back into our current players as the immediate beneficiaries … but you can’t put a price tag on what it means for recruiting.

“(This will help us) attract high-level athletes … the sharpest young men we can find, who want to be part of this great university and get a world-class education and want to be the type of young men, on and off the field, that you all will be proud of. (These are) the type of facilities we know that we need to attract the highest-level players to help us achieve our goals.”

Fifth-year senior guard and team captain Wes Martin fits that description, as an NFL prospect with a 3.9 grade-point-average and the most recent recipient of the annual Terry Tallen Football Leadership Scholarship.

“Those scholarships that we are given are literally life-changing,” Martin said to Tallen and Friday’s audience. “Without football and those scholarships, there is a good chance I wouldn’t have been able to go to college. I’d probably still be in Ohio, working on a dairy farm.

“The guys (on the team), all their faces lit up when they heard about the new facility … it means a lot to us and we’re extremely excited about it. As Coach Allen said, it’s going to be huge in recruiting. Recruits love to see new facilities. They’re going to love to see the flash. And we’re going to get some new top-end recruits in here due to that.”

It’s certainly a departure from the sort of in-house facilities that greeted potential recruits during Tallen’s time on campus.

“The weight room was in a dungeon,” Tallen recalled. “It was over in the (Gladstein) Fieldhouse. They got their money’s worth out of us, I’ll tell you what. Because you would go down and pass about six boilers and it was several stories below the ground.

“We worked hard. And we had good equipment at the time. But it was nothing compared to this wonderful (weight room) facility that we have over here. I think the locker rooms are pretty much the same (space) as it was when we were there, so that definitely is in need (of expansion). We didn’t have anything like coaches lounges or recruiting lounges, those kinds of things. We had a training room, weight room and locker room and that was about it.”

So Tallen was pretty much all-in from the moment he heard about the proposed new facilities from former teammate and IU assistant athletic director Mark Deal.

“Mark is the president of our I-Men’s Association and we were talking a few months ago about what could we do to help the program, what else we could do to help the school,” Tallen said. “… And he said, ‘Well, Terry, by the way, we just happen to have this opportunity with our new football complex.’ And I was like, ‘Oh, my God, tell me about it.’

” … It’ll bring Indiana up to the highest level in state-of-the-art facilities again. I mean, we got a state-of-the-art weight room. We got a great a great stadium. We have all the new facilities in this complex. (IU Director of Athletics) Fred Glass has done an amazing job of piecing these things together. You have all these things adding up to a great whole, a great entirety, of what allows Indiana to be competitive.

“Recruiting is extremely competitive these days, and having the opportunity to upgrade the facilities, get better recruits, give more to our existing players, it was just an honor. And it was something I deeply wanted to do.”

Tallen has done plenty since graduating in 1981 from IU’s Kelley School of Business.

Tallen earned the Z.G. Clevenger Award, IU’s highest honor for past letterwinners, in 2016. That was eight years after he helped establish the scholarship in his name, and 17 years after he co-chaired the drive for the IU
Holiday Bowl scholarship fund.

He is also an advisory board member and frequent guest lecturer at Kelley’s Business Center for Real Estate Studies.

And now he has found a significant new way to contribute in a lasting fashion to the place that launched his adult life. And he does so as a “100 percent” believer in Allen and the direction of the IU football program.

“I’m also a firm believer in ‘paying it forward.'” Tallen said. “This commitment is not just about paying back. It is also intended to be a driving force and to further expand and enhance IU’s reach in the competitive world of college football recruiting, and to motivate other student-athletes to achieve and pay it forward to future generations of Indiana University students.

“So let’s launch this great new project with the full awareness that this is the next big step in the transformation, advancement and acceleration of the IU football program and for the glory of old IU.”

A TALL(EN) TALE
The dislocated elbow that sidelined Tallen for the misbegotten Brigham Young field goal attempt that decided the 1979 Holiday Bowl allowed him to tell his own version of an oft-told tale that remains a favorite among his teammates.

“Right after Tim Wilbur had run the punt back for a touchdown that put us ahead in the game (38-37), Brigham Young was driving,’ Tallen said Friday after his $2 million gift to IU’s football program was announced. “We held them on third down. They had a field goal kicker who hadn’t missed a kick (almost) the entire season.”

And it was a chip-shot field goal.

“Coach Corso calls timeout to ice the kicker,” Tallen continued. “Calls me out of the game. Puts in a taller guy with two arms. So I’m standing over by him and, of course Father Higgins was always by his side. Father Higgins, you know, was out of central casting. He always had his stogie. He was a great guy. I went to St. Paul’s when I was here (at IU).

“And so we’re on the sideline. Timeout is called. Coach Corso is frantically looking around, ‘What am I going to do? What am I going to do? I’ve iced him. Is there anything else I can do?’ So he looks over at Father Higgins and he goes, ‘Higgins!’ And he looks at him and he points to the Brigham Young stands, and goes, ‘Higgins! It’s you versus 10 million Mormons! Do something!’ ”

Corso and his Hoosiers needed a prayer said. Higgins supplied one, silently.

“They kicked the ball and it squibs off to the left,” Tallen said. “To this day, if you look at the film, you can’t tell if it was actually blocked, squibbed or Divine Intervention. I don’t know.

“The ball falls on the ground. Coach Corso raises his arms up in the air and says, ‘Thank God!’ And Father Higgins says, ‘You’re welcome.'”