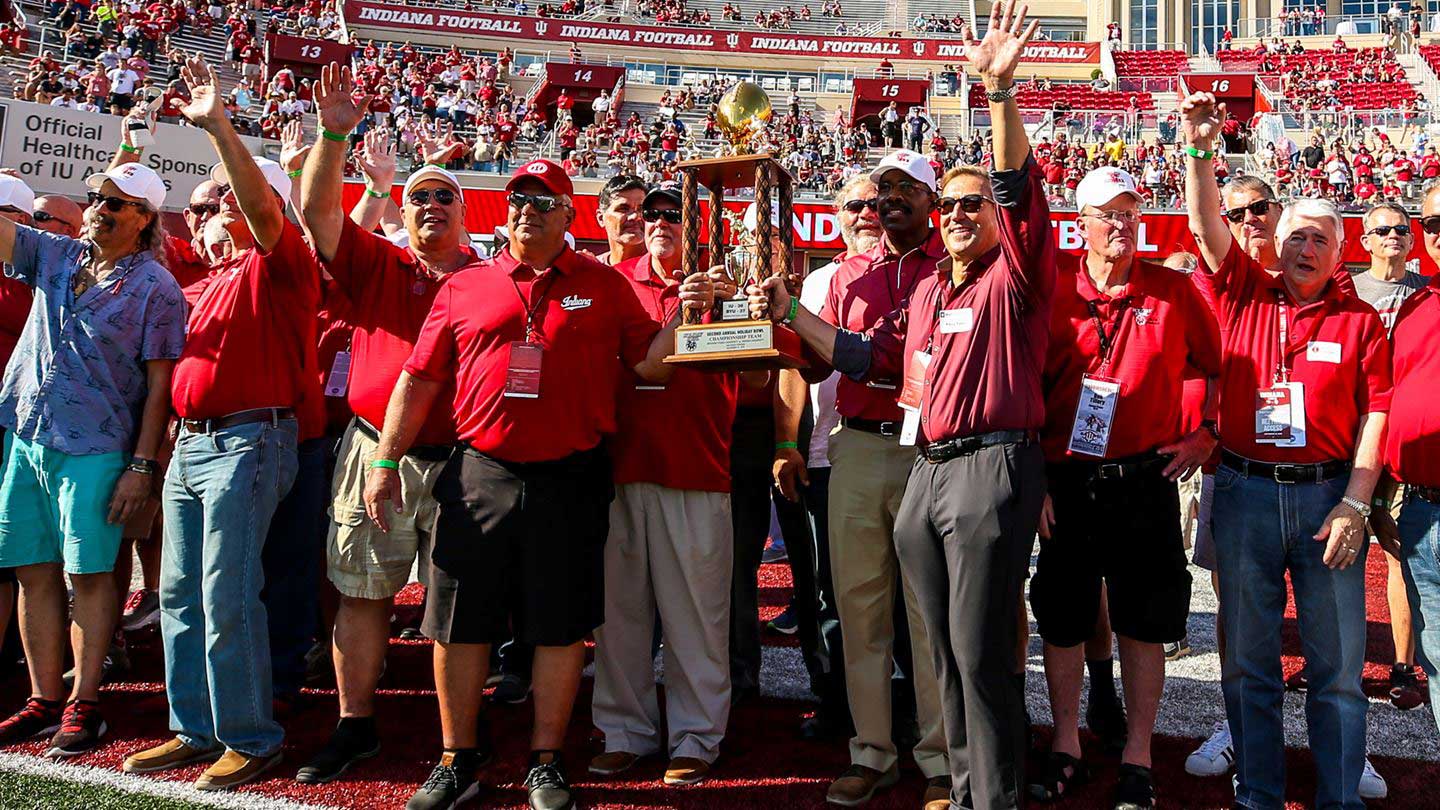 Here they are at Memorial Stadium, a few minutes before Indiana begins demolishing out-gunned Eastern Illinois, reliving the glory of their 1979 Holiday Bowl victory, the program’s first-ever postseason title and contemplating what could be next for IU.

“It’s great to be here celebrating the 40th Holiday Bowl reunion and having over 100 of our teammates back,” Tallen says.

The celebration includes joining with the current Hoosiers during Saturday’s pre-game walk from Assembly Hall to Memorial Stadium, fans cheering all the way.

“That was a great feeling,” Clifford says. “Even though it was 40 years later, it felt we should keep on going with those guys, get on the gear and go at it.”

For the record, the Holiday Bowl players didn’t. Still …

“It was such a great team and that was a special feeling,” Clifford says. “As we got to the older section of The Walk, everybody recognized us. They were saying, ‘Holiday Bowl champs – Yes!’ That was a neat feeling.”

The current Hoosiers are building for that feeling and more, and ex-players such as Clifford and Tallen are doing their part.

For Tallen, that includes his $2 million gift — the largest ever given to the university by a former Hoosier football player — for the 25,000-square-foot Terry Tallen Indiana Football Complex, which includes the Trent and Julie Green Locker Room, the coaches locker room, team lounge, recruiting area, equipment room and Dr. John M. Miller Training Room.

“It’s an honor and a privilege,” Tallen says. “When the opportunity came about, I was thrilled I was in a position to do it, and had the opportunity to do it. We hope this will be a catalyst for recruiting.”

Given IU has just had the two best recruiting classes in program history under coach Tom Allen, imagine the possibilities.

“It’s one of the best schools in the country,” he says. “It has some of the best facilities in the country. It has professors that are second to none. With the great job Fred Glass has done throughout this whole facility, the Terry Tallen Football Complex is the last piece to bring it all together.”

Clifford and Tallen have known each other for more than 40 years. They met before they came to IU, when both played on the 1977 Ohio All-Star high school game. They were roommates at Indiana as well as team co-captains for two years.

Clifford says he isn’t surprised by Tallen’s generosity, or the professional success that led to it.

As far as having input on the football complex design, Tallen says, “I had very little, actually. The university has a vision for it. They have a great vision for the whole stadium.

“We had some consultations about it. My trust was with the leadership here. Everything is done in a first-class manner. They did it better than I could.”

This isn’t the first time Tallen and Clifford have helped Hoosier recruiting. As players, they often pitched in when high school players made their official visits.

“We’d get with the recruiting coordinator and ask, ‘Who do you want this weekend? Who are the top recruits?'” Tallen says. “We’d go out and try to get the guys the coaches really wanted.”

Then head coach Lee Corso would close the deal.

“He was a great recruiter,” Clifford says. “We couldn’t wait for someone to get one on one with Coach because he’d win them over.”

Clifford was the Big Ten MVP of that 1979 season after leading the Hoosiers to a 7-4 regular season record and a fourth-place conference finish. He threw for 2,078 yards and 13 touchdowns in an era in which the run dominated.

“We were disappointed we didn’t have two more wins that year,” Clifford says. “We were right there with some of the big boys, but it didn’t fall our way.”

Tallen was a standout linebacker and defensive lineman. Corso has described him as, “One of the most gifted players I ever coached, and also a great leader.”

Wilbur was a force as a cornerback and a punt returner. In that 1979 season, he set the school record for interceptions in a season, with eight.

The next season, he made the All-America team. He still has the program record for career interceptions (19).

Wilbur was the last Corso-recruited player to receive All-America acclaim, joining linebacker Joe Norman (1978 after racking up video-game-like tackle numbers — his 444 are 60 more than any other Hoosier has achieved), offensive tackle Charley Peal (1977) and linebacker Donnie Thomas (1975).

“Coach Corso was a very good coach, a very smart man, and still is,” Tallen says. “Anyone who can survive 30-plus years in a high-profile position in television (Corso is a TV analyst at ESPN) is a very smart person. He was a great leader. He brought in extraordinary assistant coaches. He was energetic, very funny and tough, too.”

Adds Clifford: “Everything was done first class. You learned how to do things right. We did it right, and we had a lot of fun. He pulled off some stuff, and we’d go, ‘OK, Coach.'”

It all came together for the 1979 season, which produced the first of only two winning records Corso had in 10 Hoosier seasons.

The Holiday Bowl was played in San Diego, and the Hoosiers arrived as heavy underdogs to unbeaten Brigham Young and superstar quarterback Marc Wilson. That provided plenty of motivation, Clifford says.

“A lot of people were shocked that we got there. It wasn’t a shock to us. We expected to be there.”

Adds Tallen: “We came in with a lot of expectations. We worked very hard in the off-season. We told the younger players — expect to win, expect to get better. Work hard to get better every week. We expected to be a champion.

“At the same time it was a brotherhood. We called it a brotherhood of warriors. We were a very close team, and we still are 40 years later.”

Closeness came as Corso set a let’s-have-fun tone that peaked at the Holiday Bowl. It was just IU’s second-ever bowl and came 12 years after a Rose Bowl appearance.

“Probably the most exciting thing for the majority of the team was the first team meeting (in San Diego),” Clifford says with a smile. “We were all anxious that first day in this big, beautiful city. Coach Corso gets up and asks, ‘OK, what about curfew?’ We were all like, what? He said, ‘Check in at breakfast!'”

Brigham Young, on the other hand, was all business.

“We’d go to practice in shorts,” Clifford says. “I think we were in shoulder pads once for the week. Guys were going to the beach and stuff. Brigham Young was practicing like two-a-days.

“So the atmosphere was, here’s the trophy we’re going to win. We just did our own thing, ran around, and had fun, prepared. The coaches did a wonderful job. (Brigham Young) was a heck of a good team. We just performed.”

The game was a thriller all the way. The score was tied at 14-14 after the first quarter. The Hoosiers led 21-17 at halftime and trailed 34-31 after three quarters.

Although Brigham Young had more total yards (520 to 354) and fewer penalties (1 for 15 yards to IU’s 7 for 70), the Hoosiers forced four turnovers, including three interceptions, while only having one. They also controlled the ball for 10 more minutes thanks to rushing for 183 yards. Clifford threw for 171 yards.

The Hoosiers even had Father Jim Higgins, a close Corso friend, for a spiritual boost that might have helped when the Cougars missed a 27-yard field goal on the game’s final play.

“That was the greatest feeling in the world,” Clifford says. “We always say, divine intervention came into play. Father Higgins took care of a little hook there. What a great win it was.”

Adds Tallen: “We always said, ‘Thank God for Father Higgins and thank God for Tim Clifford and the game that he had.’ And Tim Wilbur running faster than we’d ever seen him run before to bring that punt back to win the game for us.”

And so those Hoosiers exceeded outside expectations, and created memories that will last as long as Cream & Crimson is cheered.

These Hoosiers have similar aspirations. On Saturday against No. 6 Ohio State, they’ll get their chance to make their own magic.